Little Badman and the Invasion of the Killer Aunties by Humza Arshad has won the Wolverhampton Children’s Book Award 2019. Over 150 children from 16 local state schools joined authors Anna Fargher, Steve Cole, Julia Green and Jenny McLachlan in an award ceremony at Wolverhampton Grammar School on Thursday 13th February. The winner was announced by the Deputy Mayor of Wolverhampton, Councillor Greg Brackenridge.

The Wolverhampton Children’s Book Award celebrates children’s books published in the last year. It is an opportunity for children aged 9 to 13 to read a range of fiction and to nominate new books which they have enjoyed reading. Both the longlist and shortlist of books are chosen by young people from schools across the region. The purpose of the Wolverhampton Children’s Book Award is not only to celebrate children’s literature, but to promote reading for pleasure and to reinforce the importance of fiction.

Humza Arshad is the first British YouTuber to have his own scripted comedy series on BBC Three in the mockumentary series Coconut. Since accumulating over ninety million views on his channel Humza has used his influence and comedy for a greater purpose. In 2015, Humza performed at one hundred and twenty schools using comedy to prevent at risk teens of becoming radicalised. He is currently an ambassador for YouTube’s Creators For Change campaign. Little Badman and the Invasion of the Killer Aunties was also listed as one of The Guardian’s 100 best holiday books for 2019. 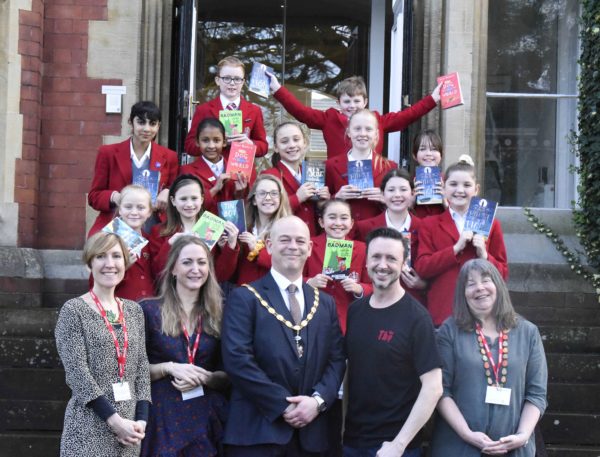 Young people across Wolverhampton selected Jane Elson as the inaugural Wolverhampton Children’s Book Award winner last year with her moving story, Will You Catch Me?. Jane expressed her honour at winning the award during her acceptance speech at last year’s ceremony: “Winning the Wolverhampton Children’s Book Award meant more to me than I can possibly say. Writing Will You Catch Me? was the biggest challenge of my life and to get the opportunity to meet the children who read and voted for the book was very special to me.”

This year, the following titles had been shortlisted: The Umbrella Mouse by Anna Fargher, Tin Boy by Steve Cole, House of Light by Julia Green, The Land of Roar by Jenny McLachlan, Little Badman and the Invasion of the Killer Aunties by Humza Arshad, The Star Outside My Window by Onjali Q. Raúf and The Dog Who Saved the World by Ross Welford.

Zoe Rowley, Head Librarian at Wolverhampton Grammar School and organiser of the awards added “We’re thrilled to have organised the event alongside Authors Aloud UK and be celebrating the very best children’s books published in the last year for the second year running. It’s such a wonderful award for children to get involved with and I’m delighted that hundreds of children from across Wolverhampton and the West Midlands made their vote count.”

Annie Everall, Director of Authors Aloud UK, collected the award on behalf of Humza who unfortunately could not attend the ceremony. Humza visited Wolverhampton Grammar School in March last year where he introduced Little Badman and the Invasion of the Killer Aunties to students from across the city.

Want to get involved? Whether you’re a published author or a local school who would like to get involved, simply contact Zoe Rowley, Head Librarian at Wolverhampton Grammar School email zer@wgs-sch.net or tel: 01902 421326.