Wolverhampton Grammar School’s campus is currently closed to students – other than Junior School students; students attending timetabled tutorials; and the children of parents who are key workers. We continue to follow government guidance and our students continue to learn from home for as long as restrictions remain.

Interested in joining our School? Our Admissions team are available to answer any questions you have. Simply email jam@wgs-sch.net or telephone: 01902 422939 and we will be in touch.

As Head of Communications at Universal Music UK, Jonathan Badyal (OW 2007) has, as you might imagine,a lively day job! From meeting the UK’s hottest music talent to working at the BRIT awards, no one could suggest that any two days are the same. 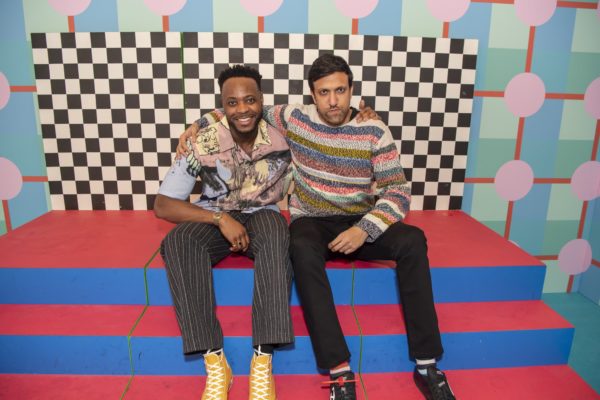 One could be forgiven for thinking that Jonathan’s career trajectory was perhaps the result of years working his way up in the music industry. In fact, it was an interest and successful career in politics which eventually led him to musi

His passion for music came to the fore during his time working at the Department for Digital, Culture, Media and Sport. Although knowledgeable and well connected across every facet of British culture, from film to fine art, he became a vocal champion of British music, and especially British urban music.

Jonathan has many philanthropic interests close to his heart. From sitting on the boards of the Roundhouse and the Black Country Living Museum. He is also an associate board member at Julie’s Bicycle and is an Ambassador for the UK Government’s GREAT Campaign. He plans to return to WGS soon to share some of his insight with students studying music.

Carrie Bennett, Director of Marketing and Communications at School, invited Jonathan to tell us more about his background and career to date.

What influenced your parents to send you to Wolverhampton Grammar School?

“I was born and lived in Wolverhampton before moving to London in 2012. I attended Wolverhampton Grammar School from 2005 until 2007 for my Sixth Form studies after joining from Heath Park. Back then, I really wanted to pursue a career in the sciences, something my family and I knew WGS had a fantastic reputation for.”

For me, WGS was the perfect launch pad for post-school life. It prepared me for university, taught me how to learn but more importantly it encouraged me to be ambitious.
The friends I made at WGS have certainly become friends for life. It’s amazing to see them going on to do so many great things, working for some of the world’s biggest companies, though I must admit I do feel a tiny bit of pressure receiving invitations to their weddings!

Any memories of particular of teachers or students?

I have huge respect for all of my teachers. So many of them were willing to give up their time to give extra lessons, support and even life advice!
Mr Phillips (Chemistry), Dr Camm (Biology) and Mrs Fogarty (Biology) just to name a few and of course JJ who was my form tutor. I also met my best friend at WGS so I’d better mention him here. Hi Tarlok Mander!

And what about immediate life after School?

I studied Biochemistry at the University of Birmingham before going on to study a Masters in Political Science there. During my studies I was lucky to secure an invaluable paid internship with Rt Hon Ed Vaizey MP, the then Government minister for Culture, Communications and Creative Industries. So while still studying in Birmingham, twice a week I would catch the 5.30am train to London before jumping on the tube to the Houses of Parliament. After finishing my Masters, the Minister offered me a full-time job and the rest is history.

I went on to have five incredible years working in politics, advising both Ed, and his successor, Rt Hon Matt Hancock MP, on policy and communications. I made it my mission to support and champion all forms of creativity – from dance to film, theatre to fashion, classical music to grime – and was fortunate to meet some of the most inspiring people doing some of the most amazing things, many of whom I am proud to now call my friends.

There were many highs. Being part of the 2015 general election winning Conservative press team was a particular highlight, but I think my proudest moment was working on Matt Hancock’s (then Minister of State for Digital and the Creative Industries) campaign calling for the scrapping of Form 696. For those that don’t know, 696 was a ‘risk assessment’ form used to close down urban music events. It stifled creativity and discouraged emerging talent from staging shows.
We felt strongly that it was discriminatory. Calls to get rid of 696 were not new.But historically, grime was something that the Government would – wrongly – never go near. We changed that in a big way, and proudly played a significant part in getting rid of 696.

Tell us more about your role now

I have been Head of Communications at Universal Music UK since August 2017. Universal Music is the UK’s leading music company and home to many of the biggest musical artists on the planet. My day-to-day involves working across all aspects of the company’s internal and external communications. It’s such a fascinating time to be working in the industry and I’ve been privileged to work on some game-changing campaigns and initiatives including an exciting project we have in Nigeria. Our Chairman is currently spearheading an incredibly important piece of work on neurodiversity in the creative industries, which has been a fascinating journey. We’re also heavily involved in campaigns around social prescribing and promoting creativity in schools. The BRIT Awards is a particular favourite of mine having first attended while working in politics. For this year’s edition we collaborated with Yinka Ilori, one of the UK’s most exciting designers, which was a fantastic experience.

I’ve always been passionate about supporting my hometown, so in January 2018 I joined the Board of the Black Country Living Museum. The position involves providing strategic leadership of the organisation alongside my fellow Board members. It’s an incredibly exciting time to be involved with the museum. Not only is it the home of the BAFTA award-winning TV show Peaky Blinders, we are also set to embark on a £25m development, the single largest in its history. It’s changed a fair bit over the years so if you haven’t been for a while I certainly recommend a visit!

Back in London, I also sit on the Boards of the Roundhouse and the leading environmental charity, Julie’s Bicycle. I’ve also recently become an Ambassador for the UK Government’s GREAT Campaign, which plays an integral role in promoting the best of Britain around the world, and a Director of the National Academy for Social Prescribing, a new independent academy dedicated to the advancement of social prescribing across the country.

Any tips or advice for a student joining our School?

Embrace it. There are so many wonderful opportunities available from sporting to artistic, political to travel. Education isn’t just about studying. Yes, it’s always important to work hard and get good grades, but it’s also about being inquisitive and open to new thoughts, ideas and experiences. If I had my time again I’d have definitely tried to get much more involved with stuff outside my chosen subjects.

And what advice would you give to a student about to leave the School?

Don’t panic. Keep your options open and meet as many different people as you can. Your network will become integral to your next steps and you never know where a conversation will lead.

If you could give your teenage self some advice. What would it be?

That the creative industries is serious business. The sector is now worth more than £100bn to the UK economy – this is more than the automotive, aerospace, life sciences and oil and gas industries combined. The creative economy accounts for 1 in 10 jobs in the UK, while it’s estimated that almost 90% of creative jobs are at low or no risk of automation. Big numbers! Despite all that, as a teenager I never considered working in the creative industries. For example, I wasn’t aware of all the different roles and opportunities available at a company like Universal Music.

My other piece of advice would be not to pigeonhole yourself. Get involved with everything you possibly can. Try things out, meet new people, be inquisitive. I wish I’d got involved with a lot more stuff at School and university.

On VE Day – WGS remembers
Team Turbo take on their own 2.6 Challenge
London Reunion 2021 – save the date!
Campus closure guide following the Government’s decision to close schools
We use cookies to ensure that we give you the best experience on our website. If you continue to use this site we will assume that you are happy with it.OkPrivacy policy