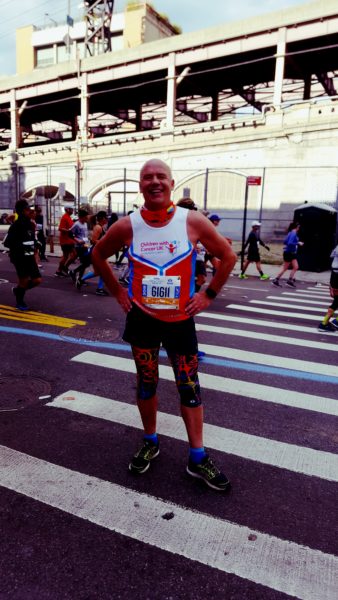 Of his old School friend, he said: “Seeing so many OWs at the funeral was warming though tinged with sadness at the loss of a dear friend and ardent supporter of the School. Ed was a big man in so many ways, but above all he was generous and supportive.”

Peter remembers his School days with warmth and affection: “I was lucky to have inspirational biology teachers in R E (Bob) Lister and Brian Arnold, who replaced him in 1966-68. Also Bruce Jackson, who drove a VW Beetle he worshipped with the registration LOV—E, as I recall, and before him a Mr Thorpe. I remember many of the teachers who taught me and whom, I realise now, we very much under-appreciated at the time.”

Outside the classroom Peter was in both the scout troop and the CCF. He also became Wolverhampton Schools’ Pole-Vault champion, although he says he couldn’t honestly recall there being too much competition! He has enjoyed running for the last 40 years, nowadays mainly 10Ks and the occasional half marathon, taking him to new and interesting places, including two very different runs in Sweden (lakeside) and Corsica (hills) this year.

However, Peter was recently compelled to enter the 2019 New York marathon in aid of Children with Cancer UK. “My grandson Josh was diagnosed with a lymphoma in his chest two years ago, at the age of four. Since then he has had daily intensive chemotherapy, using nine different drugs by mouth, into his veins, muscles and even into his spine. He has had superb care from both Princess Royal and Birmingham Children’s hospitals but still has 18 months to go.

The side-effects have been severe with critical infections, hair loss and muscle weakness affecting his mobility. Sadly, less than 4% of cancer funding goes on childhood cancers. Children with Cancer UK funds much of the UK research, whilst also supporting the families of those affected.”

Peter completed the marathon in just under 5 hours, raising almost £1500 of his £2000 target in the process. Children with Cancer UK has since offered Peter a place in the London Marathon in April 2020, so his giving page will remain open until then – https://uk.virginmoneygiving.com/JoshJourney

“I chose the New York marathon because it coincided with the second anniversary of Josh’s treatment, as well as my 70th birthday! It was a challenging, emotional and completely memorable experience, not least because of the fantastic support from the crowds, especially in Brooklyn and Central Park.”

When he visited School in July, Peter brought other ‘gifts’ with him: two former WGS library books his sister had recently come across, some 50 years after they were ‘borrowed’, although not by Peter, he assured us!