Climate change has rarely been out of the news this year. From the Swedish environmental activist Greta Thunberg to the launch of the UK’s new £200m polar research ship, named the “Sir David Attenborough” after the famous BBC broadcaster and naturalist. One Old Wulfrunian in particular is using his career and scientific expertise to help inform what the future has in store for all of us.

Last January, a team of polar scientists set sail from Punta Arenas in Chile bound for West Antarctica, on the first leg of a five-year research programme to understand the contribution that the remote and difficult to reach Thwaites Glacier, will make to global sea level.

The expedition was part of the International Thwaites Glacier Collaboration, a £20 million programme to build a better understanding of the glacier and its environment, and transmit that new knowledge to the public, the wider science community, and policymakers. Funded by the UK Natural Environmental Research Council and the US National Science Foundation, it is one of the largest joint Antarctic missions for more than 70 years and will involve over 100 scientists and support staff during its five-year timeline.

On board the 308ft US icebreaker Nathaniel B. Palmer, carrying over 20 researchers from the UK, US and Sweden, was Old Wulfrunian Dr Robert Larter, marine geophysicist at the British Antarctic Survey (BAS) in Cambridge.
As Chief Scientist, Rob’s role was to manage how much time was spent in a variety of locations to ensure that all research teams got what they needed from the trip. Pretty difficult to achieve when the outward journey was hampered by a broken rudder, which kept the ship docked for two days of repairs before it had even set sail, a storm in the Drake Passage and a medical emergency, requiring a ten-day round-trip to the nearest science base!

Rob is also the Principal Investigator on the Thwaites Offshore Research (THOR) project, which he will lead over the full five-year period. THOR will collect sea-floor samples from either side of Thwaites Glacier and look for clues as to its recent history using marine sediments, bathymetric mapping, and oceanography.

In June, Tina Erskine, Head of Development at School, had the pleasure of visiting Rob at BAS to find out more about him and the project. This is just a summary of their fascinating conversation. 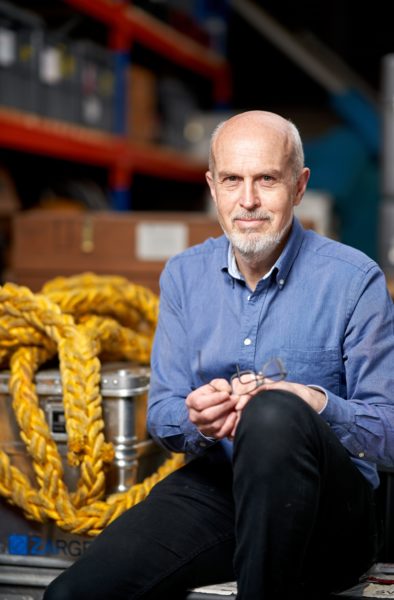 How did it all begin?

“At School, I chose science subjects for A Level. The plate tectonics revolution of the earth sciences, relatively new then, coupled with a growing love of the outdoors, led me to Durham University where I studied Geology. Going abroad particularly appealed at the time so, after graduating, I investigated possible research opportunities in North America.

However, seeing my future ultimately in industry I applied for, and succeeded in getting, one of four industry-sponsored places to do a MSc in Petroleum Exploration Studies, at Aberdeen University. The fact that both the fees and a stipend were paid was a huge incentive! A Research Associate post came up in the Antarctic Marine Group at the University of Birmingham; by then I already had an idea forming about
going to the Antarctic, so I applied, was successful and stayed for four years until the Research Group was closed. My boss at Birmingham came here to BAS and set up a Marine Geophysics division; I was the only one of the four Research Associates from the Birmingham group to join him at BAS in 1987, and have been here ever since.

During the past 32 years I have enjoyed regular research trips to the Antarctic and sub Antarctic. A few years into my time at BAS I was involved in an Ocean Drilling Programme expedition in the North Atlantic to understand better climate and ocean circulation and specifically the history of ocean exchange between the Arctic and the Atlantic. Some of the drill core records from that trip are still considered the gold standard for past climate and ocean change today.”

Tell us about the International Thwaites Glacier Collaboration.

“Recent best estimates based on satellite data have indicated that the amount of ice draining into the sea from Thwaites Glacier is contributing around 4% of global sea level rise, and that the rate is escalating rapidly. Of equal concern, warm ocean water is reaching the part of the Glacier that extends out into the sea, and it’s disappearing twice as fast as it did two decades ago.

Scientists have also thought for some time that the Thwaites Glacier is unstable because bedrock underneath slopes down toward the continent’s interior, meaning that if the ice starts to retreat, there’s little to stop it. Recent modelling suggests it could collapse much faster than previously thought and some scientists argue the glacier’s demise is already inevitable.

The purpose of the five-year expedition is therefore to gain a deeper understanding of how much ice is going to be lost from the Thwaites glacier, roughly the size of Britain, how fast and what that will mean for global sea levels in the future.

Thwaites Glacier is remote, even by Antarctic standards, originating in Antarctica and extending into the Amundsen Sea. So, despite its importance and potential impact, until this expedition, no one had ever sailed along the roughly 75-mile glacier
face. Our aim was to survey and take samples from the seabed, offshore from Thwaites Glacier, to determine the history of its retreat and the role of incursion of relatively warm water from the deep ocean in causing that retreat.

To understand present and predict future changes, we need to know more about what has happened previously. Our findings will help us to reconstruct past changes in environmental conditions and the glacier’s response, adding context to projections of future change.

Back in the 1980s, in Aberdeen, I was sceptical about ‘global warming’ but moving into Antarctic research changed that. Potentially we could see even faster sea level rise than currently predicted. A few millimetres a year sounds tiny but already a couple of storm surges since the turn of the century have come close to over-topping sea defences around East Anglia and causing major flooding events, even in the UK. Most sea defences have been built in a responsive approach not a preventative one. That’s why it’s so important to get the answers, to help inform planning and particularly regarding sea defence management.”

What are your memories of School?

“I look back on my school days with fondness, understanding only years later, that I’d had a great education and that the science teaching set me on my career path. Three Headmasters presided over my seven years at WGS – Mr Taylor, Mr Stocks and Mr Hutton.

I also remember a girl joining in the Sixth Form and that the first fee-paying intake happened as I was heading off to Durham, in September 1979.

An early memory was of a Chemistry class when a teacher took some phosphorus out of a jar, explained that it was volatile then proceeded to cut a piece off. It exploded and the classroom had to be evacuated!

I enjoyed cross-country, running in the town team and competing across the West Midlands and still run today. We didn’t have a teacher to organise it in the Sixth Form, so I did it!”

Still a Wolves boy at heart.

“I’ve been an avid Wolves’ supporter since childhood, although I’m disappointed that as a distance fan it’s almost impossible to get a ticket for home or away matches. Instead, I rely on Twitter to keep up to date, which was a lifeline in the Antarctic, and especially given the season they had!”