Wulfrunian 2019 featured actress and writer Eleanor Griffiths (OW 2012), she tells Wulfrunian readers how, by defying the odds, she has defined herself a successful career in the arts. 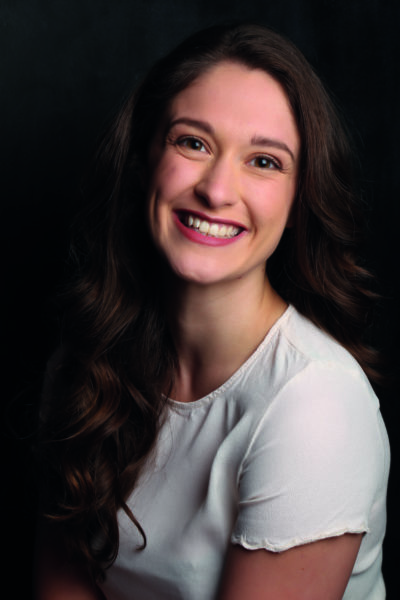 “Wolverhampton and the West Midlands is home to a rich array of stories and characters. It has a wealth of culture that is only just beginning to be enjoyed by people across the globe. Looking back, it was an exciting place to grow up and I am very grateful for the adventures I had there. As an actress and theatre creative I am very proud to tell people where I come from and the experiences here that shaped my craft.

From my time at School I have many fond memories of days spent in the art and music blocks under the tuition of the brilliant minds belonging to Ian Tyler and the late Andrew Proverbs. Many happy hours were enjoyed inventing, creating and developing music and theatre. It was the beginning of my career and appreciation of the arts. One of the things I now appreciate looking back at WGS was the space we were provided in those lessons to make mistakes and learn. Failing, I have come to realise, is one of the most important things you can do whilst in training. Only then can we allow our work to become better, bolder and brighter. It was here I learnt that art is about asking questions – not finding answers. Hence, this is an idea I have carried with me through all my creative work since.

Since leaving WGS I graduated from the prestigious Royal Conservatoire of Scotland with a BA in Musical Theatre. Based in the beautiful city of Glasgow, I trained intensively, learning how to bring the stories in my imagination to life with both truth and integrity. How to perform, create, be an active member of rehearsal rooms, to challenge and to stay curious. In my final year I took on the starring role of Sally Bowles in Kander & Ebb’s musical, Cabaret. It was our main stage production, received with 5* reviews across the board and after which I’d landed myself an agent. It would seem I was off to a flying start.

However, after leaving drama school it was not all bright lights and glitter. In my final year I discovered that I had a large benign tumour which had taken over one of my lungs and was beginning to wrap around my heart. It was something doctors at QE, Birmingham had never seen before but were certain, if it wasn’t removed soon it would probably kill me. So I disappeared from the stage, moving from musical theatre to the operating theatre to have my whole right lung removed. For someone who relies on their lungs for work and was defined for so long by their singing voice, this was an event I knew would change the rest of my life and make me question my identity. It certainly put things into perspective. I realised how much the arts meant to me and how much I would fight for my place in the industry.

Now three years post-op I have enjoyed the beginnings of an enjoyable career as an actress. I have appeared on both stage and screen, performing in critically acclaimed theatre productions, award winning films and on TV. My proudest achievement of late is “The Art of Skipping”, a new musical which I wrote, produced and directed. It follows the story of a blind astronomer navigating her way back to the stars. The show went up to the Edinburgh Fringe this summer receiving 5* reviews and was nominated for Best Musical. We have since been in touch with large London theatres and new musical producers about taking the musical further. My biggest obstacle now, as with many new projects, is funding. However, I have come to realise that with ambition, persistence and a drop of stubbornness, more things are possible than you can ever imagine.

I know for a fact that my time at WGS lit that fire of ambition in me. It was a wonderfully inspiring school, where I was taught to reach further and strive for your goals. I am so grateful to teachers across all departments, for the support they gave and importantly for igniting that passion.

The arts is a tough but rewarding gig and with the right tools, a head full of curiosity and a passion to create and challenge, you’ve won half the battle.”

Old Wulfrunians Reach Quarter Finals
Calling the Class of 2020!
School Celebrates a Virtual Founder’s Day
Scottish Success for Aaron Rai
We use cookies to ensure that we give you the best experience on our website. If you continue to use this site we will assume that you are happy with it.OkPrivacy policy