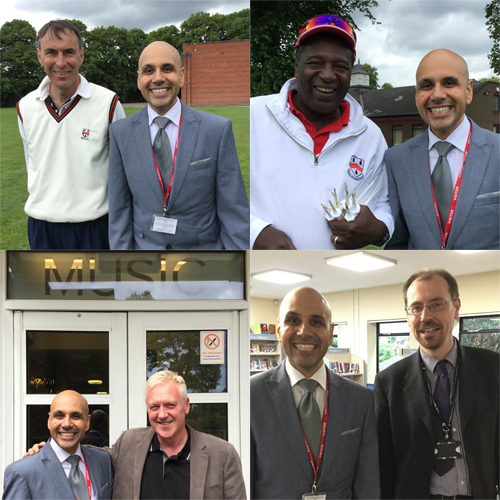 We were visited recently by former student Johnny Shah (OW 1997) whose career following university started out in retail but changed tack after a fundraising half marathon in aid of the Beacon Centre for the Blind in Wolverhampton.

Whilst strumming his guitar and jogging through the streets of Wolverhampton, he was approached and thanked by the mother of a child supported by the charity and knew at that moment that he wanted to continue making a difference. Fifteen years later Johnny is now Head of the Sandwell and West Birmingham Hospitals NHS Trust Charity.

The memories came flooding back during his tour round School and as you will see from the photographs a few familiar faces also came into view. Johnny is pictured with Peter Hills, Theo King, Duncan McAllister and Brian Perkins (his former guitar teacher who also performed at his wedding).

Make sure your contact details are up-to-date to receive our news soundbites and Wulfrunian magazine by completing our online form.