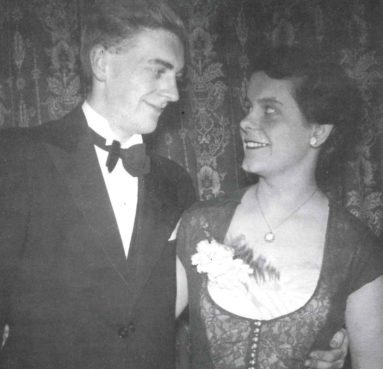 Generations of Wulfrunians will have been saddened to learn over the weekend that Florence Darby passed away on Friday 29th November after a few months’ illness.

Florence joined WGS in 1964, following her husband John who had been appointed Head of Chemistry (later, of Science) in 1956. She was drafted in, somewhat unofficially, to “help” in the music department by the legendary Rev Frank Rust, and somehow just stayed. By the time I first worked with her in 1981, she was also teaching maths (she had a joint-honours degree in maths and music). While I remember her from that time as a multi-talented musical colleague (with views similar to mine on the importance of widening participation in music throughout the school), responses on social media to the weekend’s announcement demonstrate just how much former students owe to her for the solid mathematical skills and sheer intrinsic interest in the subject she instilled in generations of 11-13 year-olds.

Former colleagues, particularly those involved with the selection and entrance procedure, will also recall that, from (I’m guessing) around 1980 until long after she had officially retired, Florence produced the school’s own Verbal Reasoning tests, those fiendish brain-teasers which many ten year-olds sailed through, but which were prone to reducing invigilating teachers to tears of frustration! After I became Head, I was accustomed to Florence whisking the papers away on that January Saturday morning, phoning me on the Sunday afternoon to announce that she’d marked them all and giving a view on the overall standard of entry. She was always positive and encouraging – and always right.

That kind of going the extra mile is a hallmark of the great teacher, and Florence certainly fitted the description. When I was a very young head of music, we used to joke about how she was a replacement mother for me in Wolverhampton: and she was. She encouraged, supported, and calmed me down at need, always generously, always quietly. As I became longer in the tooth at WGS, I saw her do the same with other young teachers. It was just part of her giving and selfless nature.

Having notched up 68 years’ service between them, John and Florence retired together in 1994. While John busied himself with exam marking for some years, Florence continued with the entrance exams: and both were tireless supporters of school events, concerts, plays and the like. They remained wonderful hosts to a wide circle of friends (Florence was a formidable cook), and loved spending time with their children, Nigel and Alison, and two grandchildren.

Though age slowly began to circumscribe their activities, that happy period nonetheless continued in similar vein until this past summer, when Florence received the diagnosis of her terminal illness. When I last visited her in late October, she was in no mind to complain. On the contrary, she felt that the diagnosis of her illness gave her space both to prepare for the end, which included finding appropriate residential care for John, and to relish the countless messages of love and support that she received. She was probably the only person to be surprised by such an outpouring of affection.

Typically of so generous a soul, Florence said she felt privileged to be granted the time to receive all that love. The rest of us know that, in fact, it was we who were privileged to know Florence and to be the beneficiaries of her love. RIP