Robin grew up within a mile of the gates of WGS and after successfully negotiating the 11+ exam he arrived at Wolverhampton Grammar School in 1949, the era of Warren Derry. 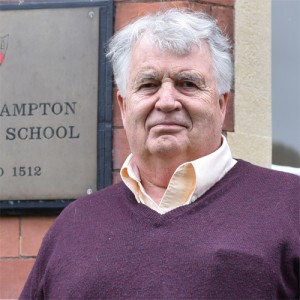 In his own words, “he was an average student who benefitted from some excellent teachers” – the star for him being Noel Stokes. He progressed through O-levels, then A-levels and was awarded a State Scholarship to do a degree in Chemistry at Imperial College London. He remained there for seven years, obtaining firstly his B.Sc., then the Ph.D., and years postdoc under Prof DHR Barton, future Nobel Laureate, before moving to the USA.

His career was spent mainly at Eli Lilly as a research chemist working on the design and development of new antibiotics. He was part of a group that was successful in discovering several new antibiotics in common use today. On retirement from Lilly he moved to a biotech company in San Francisco where he was a senior VP involved in researching autoimmune diseases. After 5 years, he retired again to do consulting. He is the author of over 100 scientific publications and patents, together with numerous books. He was awarded the D.Sc. by London University in 1985.

He has always acknowledged that any career success is mainly due to the educational grounding he received at Wolverhampton Grammar School and now is the time for repayment. Several years ago he initiated the formation of a USA charity devoted to provide additional funding for the School. This has so far provided partial funding for the new cricket pavilion and is presently funding some hardship students.

Robin’s legacy will always be very visible in School – he has personally provided funds towards a new Chemistry Laboratory (known as the Robin Cooper Laboratory) and the School has in thanks installed a window in his honour in Big School.